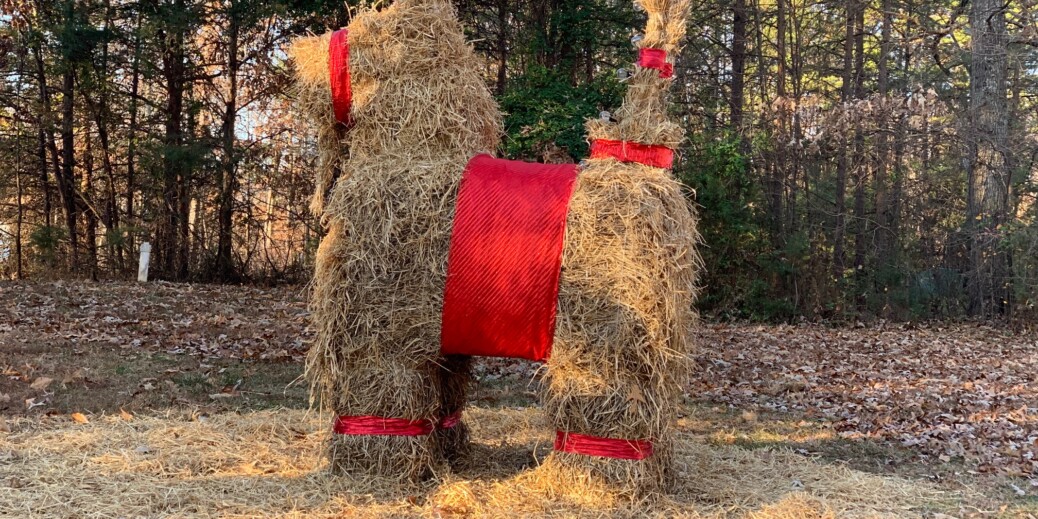 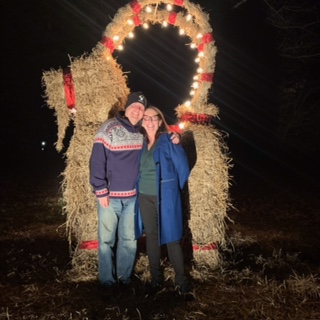 About a decade ago while stationed in Italy, John Oman stumbled across a website featuring a live camera of the Gävle Goat.

Oman, who works for the Navy, immediately was hooked.

In down time, he’d check out the live camera to check in on the goat, a 42-foot-high straw structure that has served as a holiday tradition in Gävle, Sweden since 1966. Each year, the goat is erected, and most years, the goat is burned or destroyed by other means.

That first year Oman began watching from afar, the goat perished by fire.

“I’ve obsessively been following the goat,” he said. “I still do it to this day.”

His wife Aileen, who works as a government contractor, added, “I married into his goat obsession.”

That “obsession” has led Oman to build his own Gävle Goat five years and counting. After celebrating their goat in Moyock, N.C., for four years, the Omans introduced their goat to neighbors at Lake Anna in Virginia this December.

John uses two-by-fours, furring strips and about three bales of straw to construct a 9-foot goat for family and friends to enjoy. The first year in Moyock, they had a party for about 25 people to celebrate the lighting of the goat, which took John about two weeks to build. Three years later, Aileen hired a Santa, and the Omans served Swedish meatballs, Swedish Fish and Swedish cookies (gingerbread with blue cheese on top), among other things, for a party of 100. 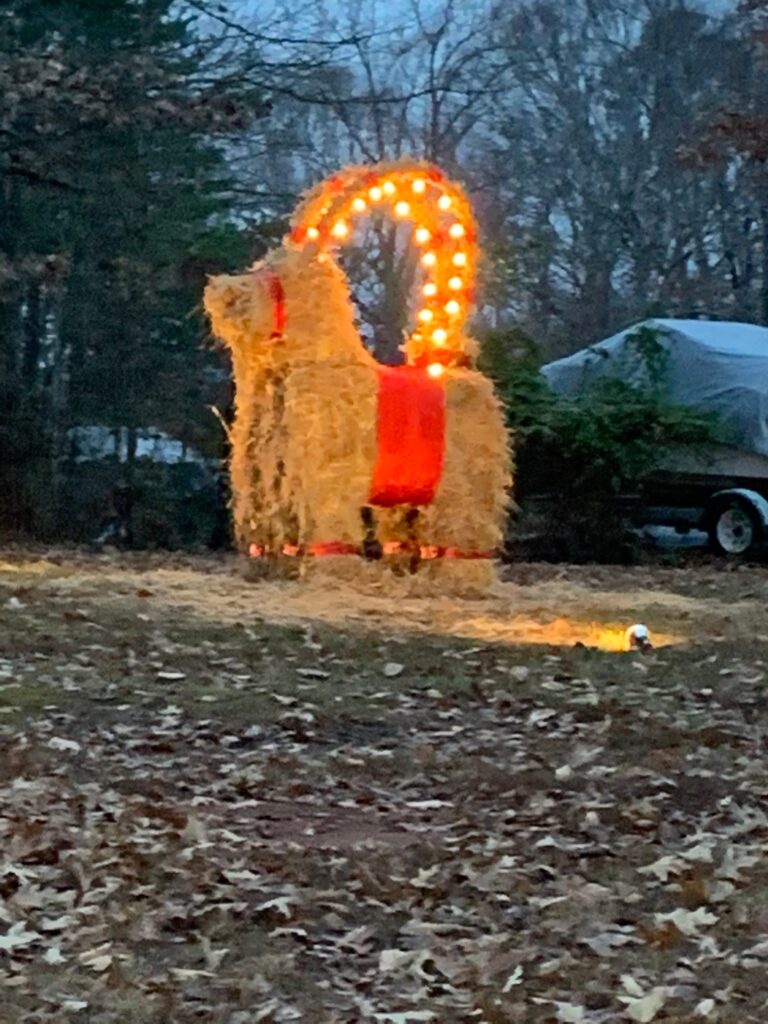 “Fortunately, I liked him a lot when he introduced me to the goat obsession,” Aileen Oman said. “I’m not quite as obsessive, but I love the goat idea. This is our tradition…it’s something he and I have together. I love that part.”

This year, their first in Virginia, about 35 folks turned out, most of whom never had heard of the famous Swedish goat.

“You kind of always have to explain,” said John Oman, who now starts building the goat three or four days before their party. “You tell them ‘We’re having a goat party,’ and they think you’re having real goats. Generally, the reaction we get from everyone is positive, and they think it’s a neat tradition. Of course, everybody says they want to burn the goat.”

John’s tie to Sweden is that his grandfather always claimed he was Swedish and spoke Swedish. Through recent genealogy tests, John said, it appears his grandfather actually was from Finland and grew up in an area where Swedish was spoken. Aileen has a brother-in-law who is Swedish.
Other than those connections to Sweden, they have the Gävle Goat, which they visited in 2016, the 50th anniversary of the tradition.

In July of that year, John randomly checked out the goat’s website and saw that a big party was being planned for the anniversary. He emailed the site, sharing an image of his goat, and was invited to the party. A Swedish newspaper featured their story, and when they arrived in Gävle, a documentary crew followed them around for a film.

About 50,000 people were on hand at the party to enjoy bands, celebrating, fireworks and, of course, the Gävle Goat. That night, the goat was burned down.

The Omans were staying at a hotel at Castle Square overlooking the goat. The room was a little warm, so they opened the window. 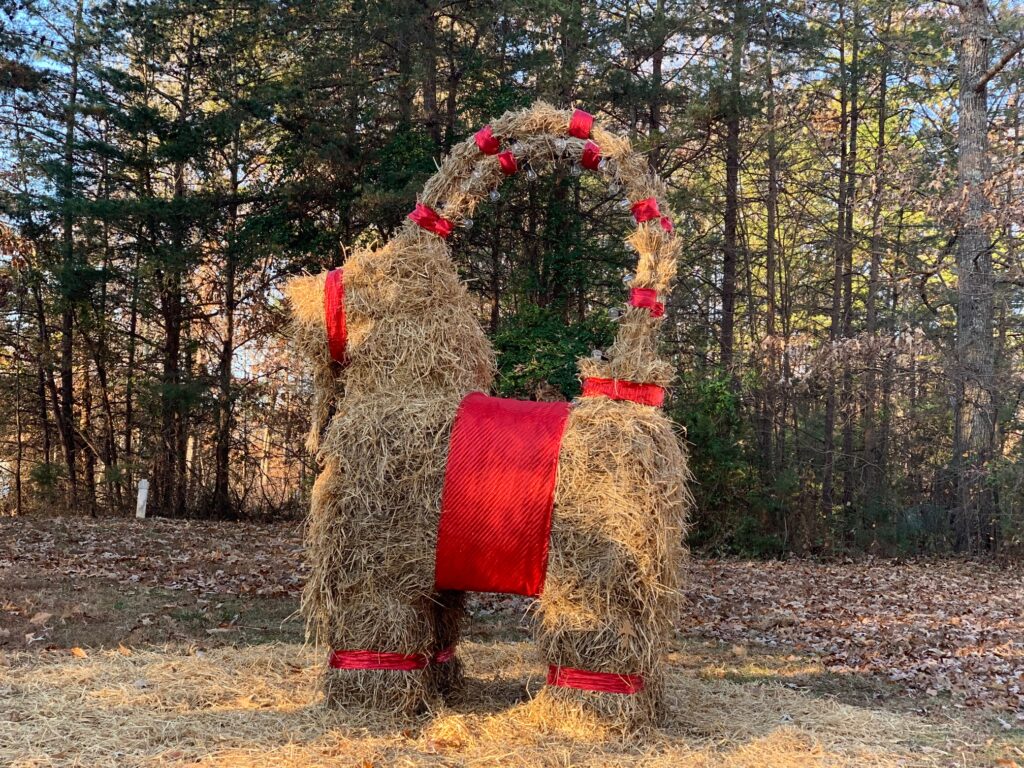 “Hey you, stop!,” John recalled hearing from the direction of the goat. “That was odd. That was in English.”

They rushed to the window and filmed the goat burning.

“You can hear us, ‘Oh my God, I can’t believe they burned the goat down,” John said of the video, which they provided to the documentary crew. “It’s pretty shocking. I guess you’re stunned. Then it was sad because it was done for the year.”

Aileen added, “For me, it was very sad. It made you sick to your stomach. It means something to some of the people in that community.”

It’s estimated that the goat has survived the holiday season only 16 times in 52 years.

The Omans have had better luck, going five for five.